Why we ditched our flat company structure after seven years 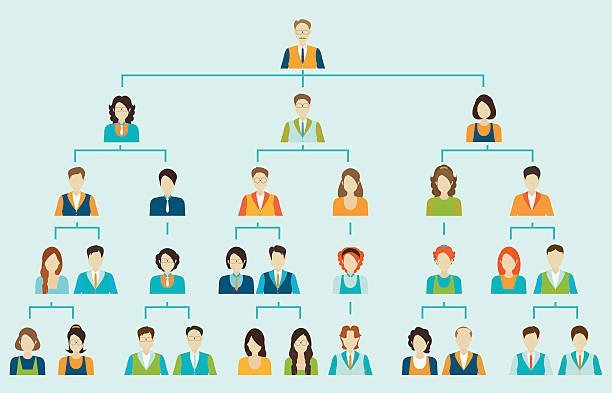 I still remember it as if it was yesterday. BossData was but a mere little speck in the vast world of digital marketing agencies. Our office hosted 6 ambitious marketers and was .. charming. In its own ways..

Working above a small coffee bar, we could hear everyone’s chit-chat below.

It was good for keeping up with the gossip, but focusing on our work wasn’t always a given.

The mice sprawling across the ceiling after hours weren’t exactly helping either.

Ahh, how the times fly.

Back then, our team had of a very, very flat organizational structure. Everyone had a say in hiring / sales / marketing /…

All of our visions were aligned since we made every company’s decision together.

It was perfect, so we swore to keep this structure alive.

The flat structure started turning on us

As our company grew – we have 25-ish employees at the moment – we noticed we had outgrown our once beloved flat structure: 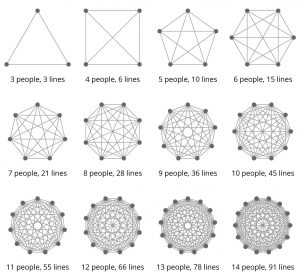 This graph says it all. A team of 14 people already requires 91 lines of communication. Imagine having a team of 25..

With this new situation, we started wondering: ‘How can we organize ourselves to keep all the advantages of the good ol’ days (autonomy, speed and engagement), and that gets rid of all these growing pains?’

How we implemented a new structure at BossData: circles & pacers

Every company has a structure. Even the ones who claim they don’t. (☝️ guilty)

When you don’t define your team structure, one will always form by itself. Unfortunately, this organic/non-defined structure lacks authority, accountability and alignment across the team. In the long run, this invisible, shadow hierarchy creates conflict and confusion: slowing your company down.

Time for a confession: at BossData, we were working in a shadow hierarchy for a year or two. Yes, we claimed to be a flat organization but it was obvious that certain people had a bigger say in discussions than others.

Instead of fighting this and believing that we needed to remain flat as an organization, we embraced it.

Taking our heads out of the sand

We got rid of our shadow hierarchy, and made room for an actualized hierarchy. A true representation of our already existing (but ignored) hierarchy. To achieve this, we weren’t just going to copy-paste a classic corporate company structure.

And, we weren’t going to reinvent the wheel either…

So we scoured the web on the lookout for companies who faced similar issues. And we found them! It turns out that major companies like Buffer, Spotify, and Wistia already fixed these issues. So we decided to adapt their organizational models to fit our own needs. The end result is unveiled in the next part of this blog.

To recap, we realized that BossData was most efficient when we were still around five to six people big. To get closer to this situation again, we split BossData into 3 circles. 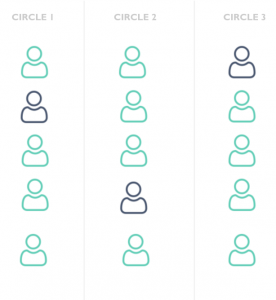 What about these so-called ‘Pacers’?

In sports, a pacer is someone who leads a long distance running event for the first section. They ensure a fast time and avoid excessive tactical racing. And most importantly: they run in front of teammates to make them waste less energy. (wikipedia)

This is exactly what a pacer needs to do at BossData. They keep track of all long term strategic progress made for clients for which their circle is responsible and watch over the personal development of their circle members.

Here’s what a pacer works on during an average workweek:

Won’t knowledge and insights get stuck within circles?

This might’ve been the biggest worry our colleagues had when we first introduced our circle-pacer system. And they were right. This is the most important aspect for a company to grow together.

That’s why there’s a whole extra aspect to the story that enables cross-pollination across the company: guilds—a big shout-out to Spotify’s team structure, where we ‘borrowed’ this term.

Guilds are a group of people with a similar passion for a work-related topic: it doesn’t matter what circle they come from. Guild members get to allocate 10% of their time to guild-related activities. It’s their goal to study their subject and push relevant information back into the organization. 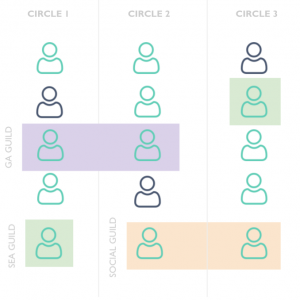 Here’s an example of how a guild’s work flows from start to finish: 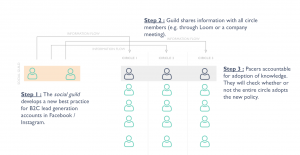 To sum things up: we ditched flat, but kept the autonomy

Looking back, it was wrong of us to hold on to our beloved flat structure for so long. In reality, a shadow hierarchy had already slipped in our organization. 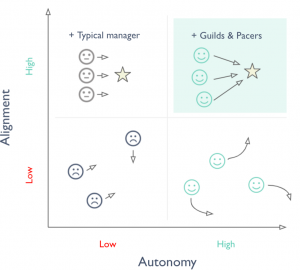 We finally actualized that hierarchy by introducing a pacer-circle structure. As a result, we kept the autonomy we had in our flat structure, and got a higher sense of alignment across colleagues too.

We wrote this blog in the first month of working with our new structure. We’re sure we’ll run into situations where it’s clear we need to rethink our way of working. Constantly adapting and adjusting is the only way forward. We’ll provide an update on how the system is working out for us in six months.

In the meantime, read about the update on our unlimited holiday policy.

Digital marketing is exploding like a mint in a Coke bottle, and big corporations are jumping on the wagon. This goes hand-in-hand with the growing desire for an in-house marketing team. Why not? When digital marketing becomes an important aspect…

Unlimited paid holidays, one year later. The Good, the Bad, and the Ugly

When you Google ‘unlimited holiday policy’, you’ll lose all your courage to ever install a similar holiday policy. The number of negative reviews are… staggering, to say the least.  As a result, when we first voted to adopt an unlimited…